Skip to content
Supporting the Arts while you sleep

Creative Director Dr. Marisa Carnesky has adorned this evocative and spacious room with showgirl and show-woman inspired ephemera including pieces of costume and artefacts that embody the experiences women performers, past and present, who have graced Blackpool’s legendary stages. There are 4 telephones which relate the stories of Blackpool’s palaces of entertainment and the women who made them come alive from 1950s to the present day.

It has especially co-ordinated dusky pink lighting, furniture and decor to help you spend the night dreaming of the grit and glamour of a life in showbusiness. It has a super comfy king size bed, Smart TV (that you can mirror your own screens on), a sea-view reading area, original exposed brick walls and original plasterwork, as well as a porcelain tiled bathroom with shiny German and Swedish fittings. Its own dedicated free superfast wifi.

Marisa is a show-woman herself and Creative Director of the extraordinary Carnesky Productions.

Carnesky explores the role of women in spectacular popular performance traditions – looking at the life stories and shows of the lesser known BAME, Jewish, Eastern European, Irish, immigrant and minority women performers that have appeared in Blackpool shows, and the politics that surrounded them. 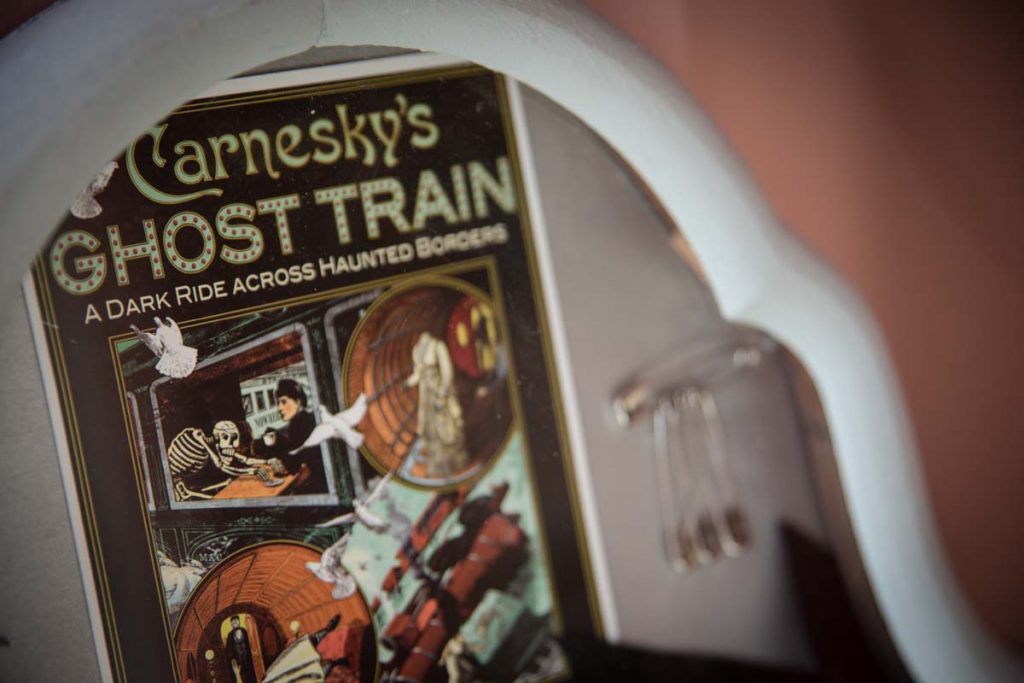 Her design of Room 1.01 relates these stories through montages of imagery, collections of objects and oral history recordings. There is an installation of four telephones which tell the stories of Blackpool’s palaces of entertainment and the women who made them come alive from the 1950s to the present day.

She has adorned this evocative and spacious room with showgirl and show-woman inspired ephemera including pieces of costume and artefacts that embody the experiences of women performers, past and present. Some, such as the Jewess Tattooess, are from her own performance archive.

This room is the only one that has been left with fragments of the original Victorian plasterwork and decoration to augment the atmosphere of Carnesky’s installation.

Marisa Carnesky is a British live artist and showwoman. Carnesky has won many awards, including the Laurence Olivier Award for Best Entertainment in 2004, an Edinburgh Festival Herald Angel in 2005 and Time Out Best Theatre in 2004.

Carnesky Productions is interested in the use of spectacle; fairground rides, magic illusions and grand ritual as a means of creating highly accessible but sometimes provocative work, rooted in popular culture, that promotes cultural and political discussion.